Ask for your appointment

The septoplasty that we perform in most ENTs is based on the Cottle technique and allows us to very efficiently solve functional problems derived from the deviation of the nasal septum, but nevertheless improves cosmetic problems in a very limited way.

Due to this, it is very frequent that the otorhinolaryngologists when a patient requests a combined functional and aesthetic improvement usually go to a fellow plastic surgeon who will proceed to perform a seprorhinoplasty in a combined way where the ENT corrects the deviation of the nasal septum and the plastic surgeon tries improve nasal aesthetics.

For all the aforementioned, it is really difficult for a patient who requires functional and aesthetic improvement to have a satisfactory result since the traditional way of understanding and treating the nose are completely antagonistic, while meanwhile, otorhinolaryngologists can perform a correct nasal examination and improve symptoms rarely have the training to combine an aesthetic improvement and on the other hand the plastic surgeons lack training to explore the nose and therefore proceed to a correction of the nasal septum and turbinates.

Particularly I have been performing nasal surgery for more than 30 years, first I started performing septoplasties and because I was a quotient of the limitations of the classic Cottle techniques that are what we usually do in our specialty each month I was becoming more interested in the techniques of plastic surgeons starting with the Joseph technique or closed technique but note that they have some very important technical limitations especially when we want to proceed to correct a nasal tip so that they tend to be pinched, asymmetric, or excessively turned up (rotated)

This is the reason why many noses in which a combined septorhinoplasty is performed between ENTs and plastic surgeons, the results are not adequate, another cause is the way to perform ostotomies or nasal fractures that also have a tendency to collapse the nose. and generally produces an unnatural nose as a result.

Particularly I started in the open or external rhinoplasty technique at the end of the 90s of the last century with great enthusiasm but I was also able to verify that the results were not as expected and the reason is simple, first when making an incision at the level of the columella and lifting all the skin and subcutaneous tissue considerably alters the nasal anatomy, therefore the correction maneuvers we carry out are not adequate, and we cannot clearly see the result of the intervention until we close the incision or columellar cut at the end of surgery with which we no longer have room for maneuver. Another very important problem with external or open rhinoplasty is that if we combine it with a correction of the nasal septum or septoplasty, especially in patients with great respiratory difficulty, the nasal tamponade exerts great pressure. on the columellar scar favoring the stitches or even a necrus to jump tissue death at this level, which is a very serious problem and very difficult to solve.

My experience of more than 30 years of septorinoplastyis that the techniques that we usually carry out may be adequate in some cases but in the majority of patients that require functional and aesthetic improvement, the results are not satisfactory

We must understand that the nasal anatomy justifies not only the difficulty in breathing but also explains why a nose has a certain shape.

A nose that is very projected or aquiline is very difficult to breathe well even if it has a completely centered nasal septum in these cases, it is common for patients to come to my office commenting that they have explained that a correction of the lower turbinates through turbinoplasty would allow them to improve nasal respiratory insufficiency, particularly I comment that if we do not change the shape of the nasal pyramid (nasal dorsum) the nasal flows will never be adequate in the same way that a patient with a very flat nose is very difficult to breathe properly from there is the importance of performing a functional and aesthetic integrated surgery or septorhinopasty to achieve adequate and lasting results.

Closed rhinoplasty, with its many varieties, is based on making an incision (cut) in both nostrils. It has the drawback that it is very difficult to foreseeably correct a problem of the nasal tip because the access it provides is limited.

The photo shows the external correspondence of the internal incision in this case unilateral, but it is always bilateral. 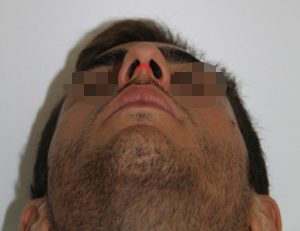 To solve this problem, the so-called open or external rhinoplasty technique was designed, which consists of making a cut at the level of the columella. This technique allows great access to the cartilage and the nasal dorsum, understanding what the aesthetic problem is and seeing what maneuvers must be performed to correct it.

The problem is that the incision is made at the level of the columella and this scar is under great tension, due to the nasal tamponade necessary to prevent bleeding if a septoplasty and / or a turbinoplasty is performed simultaneously. 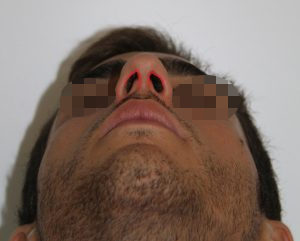 For all these reasons, after many years of experience, and considering that the nose must be treated in an integrated way, in which functionality and aesthetics are totally related, Dr. Barceló Colomer designed his own technique.

With the techniqueRhinoplasty in Barcelona
Dr. Barceló Colomer can relate the anatomy of the nose and the aesthetic consequences that result from it, observing what are the necessary corrections and thus achieving a very natural nose and good breathing.

Own technique Dr.Barceló: Functionality and aesthetics are totally related.Technique presented at the Congress of The American Academy of Plastic and Reconstructive Surgery (Boston 2010).

It is very common for patients to visit an otolaryngologist for a problem of nasal respiratory failure (difficulty breathing properly through the nose, headache (headache) or runny nose (nasal discharge).
In order to be able to make a correct diagnosis, it is very important to ask if the nasal respiratory failure is persistent, is it occasional or if it is predominantly due to a nostril.

Once the symptoms are heard, we proceed to a complete exploration of the nostrils through an endocope that allows us to determine the cause of the problems such as a deviation of the nasal septum, hypertrophic turbinates, a nasal polyposis, a chronic sinusitis or rarely a neoformation. nasal.

If necessary, we request a radiological study using a sinonasal CT.

If the cause of the symptoms is a deviation of the nasal septum, we recommend proceeding with a surgical correction using a septoplasty that is usually combined with a reduction of the lower turbinates or turbinoplasty.

Septoplasty combined with turbinoplasty is an intervention that is carried out by means of general anesthesia and usually requires a nasal tamponade for about 4 days.

ADVANTAGES OF THE OWN SEPTORINOPLASTY TECHNIQUE DR.BARCELÓ WINNER OF AN AWARD AT THE AMERICAN CONGRESS OF PLASTIC SURGERY IN BOSTON